The The Lean CEO: Leading the Way to World-Class Excellence reveals the true power of Lean through in-depth interviews with CEOs who have gone beyond tool adoption and established Lean as a corporate-wide management system. The all-star cast of twenty-eight leaders represents a wide variety of organizations, including global manufacturers Ingersoll-Rand and Barry-Wehmiller, healthcare icons Thedacare and Virginia Mason, the states of Connecticut and Washington, historical icons such as Wiremold, and many more. – From Amazon 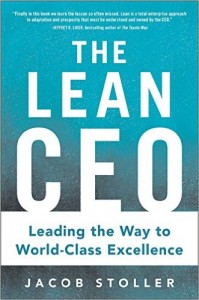 An excerpt from next week’s podcast with author, Jacob Stoller:

Joe Dager:   When you look at the total body of work, there’s a lot of material, there’s a lot to digest from your book, but did you come away or do you think a leader will come away with one overwhelming message that comes from the book?

Jacob Stoller:    Well you know Joe, I tried to step back when I wrote this because I figured and I give the analogy, it’s just like I’m a local rock band and I’m doing the headline performance, and they’ve got the Rolling Stones waiting in the wings to perform. Everyone wants to hear from the CEOs. I mean let’s face it; I have a really great line-up of CEOs, and I thought that my most important job was to make sure that they could speak clearly and as candid away as possible to my readers. Having said that, what I hope is that readers will pick up different things depending on where they are in their Lean transformations, and that’s actually been very much the case. There are some leaders that really stressed and talked about people-centric management in a very open way. We have a leader to talk about collaborative management teams. You have somebody like Jim Lancaster who really figured out the whole problem of management culture. How do we build a management culture? I think a lot of people are struggling with that, so they’ll see that as perhaps the most important part of the book. I guess there’s not really a single one.

Maybe the only single theme I would say that I really hope people get is that a lot of this is about beliefs. We tend to look at leaders and leadership, and we tend to talk about, well what’s the DNA of a successful leader and all this kind of stuff. If you look at the Lean CEOs in the book, you see their personalities are very, very different, different management styles, but they share these common beliefs in people, in continuous improvement, in the whole idea of learning and last but not the least, the whole idea of what they call Gemba in Lean. The Gemba, which is the workplace where the value is created. They believe very, very much in the content of customer value.