Author of The Complete Lean Enterprise: Value Stream Mapping for Office and Services, Second Edition, Drew Locher, is my podcast guest this week and we touched about how the innovative a Value Stream Mapping process could or as drew put it should be. You can learn more about Drew at his company web page, Change Management Associates..

An excerpt from the podcast.

Joe Dager:   Innovation is such a big word now. Can we be successful and be real innovative and create that blue sky thinking with incremental improvement with Lean? Following something like a value stream map, can that really lead us to breakthrough thinking? 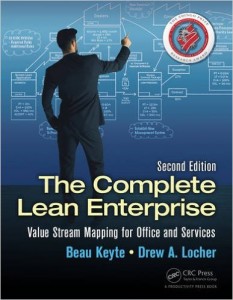 For example, this happens to be a product development system that I helped facilitate a group. When I first met with them, a large corporation, I said, this is not for the weak of mind. We’re not going to value stream map your development system and look to flip through the pages and look for, ooh, let’s reduce lead time by 20% or let’s take 5% of the process timeout or whatever modest, measurable results that they were thinking of and had tried in the past. We’re going for the big game here. If you’re not after no less than 50% reduction in lead time in the market, I’m not interested in working with you.

They had to think about that and then they came back and said, that’s what we want. I said, okay. We facilitated the event. It went very well. They’ve got a future state that they are still socializing, which is all relatively recent. It was just last fall, last November. They are still socializing the future state, the peak position of what they believe they can do with this very large organization with not just key decision makers but all the different functional departments because development processes affect everyone. You’ve got supply chain and purchasing. You’ve got obviously the engineering and designing folks. You have the ops people in there. You’ve got everyone in there. They’re still socializing that, and they’re almost apologetic, and I said, don’t worry. This is big stuff. What you’re recommending to get the results that you’re projecting are very significant, and we’re talking very large scale change. But again, change, that can be implemented within a year; the elements within 3 months, 6 months, 9 months, or once people are willing to accept the changes that they’re recommending. We’re after a radical change with value stream mapping. If we’re after the incremental change, there are other methodologies that we can use; maybe classic process mapping. We don’t have to take the time and effort that’s required to doing proper value stream mapping if we’re just after incremental improvements.