Video games are the bridge to massive new audiences, which will help adoption once people are more familiar with the concepts of digital ownership. Demonstrating how video games utilize the following three areas, Virtual Reality, Augmented Reality, and NFTs, can enlighten us on the many uses possible once people have a better understanding of these concepts. 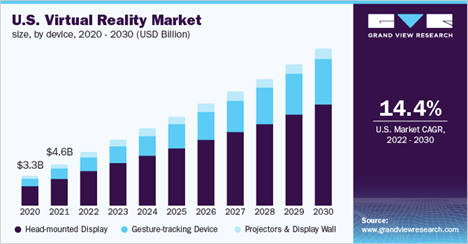 With more and more people taking on VR headsets, there will be more people who are interested in VR content creation. Since VR headsets are much more expensive than standard gaming consoles, the content needs to be much more high-quality and creative. When VR content creators are exploring new ideas, some may come across the idea of creating a metaverse (or something similar) and be inspired by the concept.

Gaming technology is improving rapidly and is edging closer to smartphones with every new release. VR is helping to bridge the gap between the physical and digital worlds. A social aspect of gaming may also be a positive for adoption. Gaming communities are very active and positive, and VR has the potential to make them even more robust.
VR creates an experience you can’t get on a computer monitor or phone screen, making the experience much more immersive. VR games also allow you to play games with other people worldwide in a way that wasn’t possible before VR. You can now play games with people you may have never met in real life, but now you can do it as if you were in the same room together. Even though you are playing the game through a headset and maybe thousands of miles away, it feels as if you are right there with them. You may be playing the same game, but now you can do it together as if you were in the same room.

The next generation of VR will also be wireless and untethered, making it much more accessible and significantly cheaper. These advancements will make VR much more appealing to the average consumer. VR has already proven to be a compelling storytelling medium, and the adoption of VR in education, tourism, healthcare, and other industries will expand its reach even further. Facebook and Google have invested heavily in VR, buying out Oculus for $2 billion in 2014 and launching Google Cardboard in 2014, a VR headset that you can build from a piece of cardboard for just $15. VR is undoubtedly on track to become the most immersive and engaging communication platform ever, with VR expected to become a $40 billion industry by 2021.

VR is currently the most widely adopted way to experience the Metaverse, but AR will likely be the more important and long-lasting technology. AR can be much more accessible and widely adopted than VR. Most people have smartphones that can run AR applications, which means that most people will be able to get involved with AR. AR glasses can be programmed to display information, such as directions and maps, right in front of you while looking at the real world. AR also has the potential to be much more immersive, as well as interactive, than VR. In a sense, AR has the potential to make all the information in the real world into an enormous computer terminal. Here are five reasons why:

AR can integrate digital information with the real world to create a more engaging and interactive experience. Imagine attending a business meeting and seeing a virtual screen projected onto the conference room wall. Now imagine that screen displaying essential data about the company’s financial performance. AR has the potential to transform every meeting into a data-rich, engaging experience.

AR works by superimposing a computer-generated image over a person’s view of the real world. It can be anything from an image of a smartphone screen to a virtual sign to an image of a physical object that changes when you change your viewpoint. The most common example of AR is found in its use in smartphones. When you point your phone’s camera at something and it “recognizes” it, it displays information on your screen about that thing. For example, pointing your phone at a book might display the book’s title and author on the screen.

AR headsets have the potential to turn any surface into a computer screen, opening up limitless possibilities for how people use these devices. This could be anything from working on a surface with AR capabilities to a surface in your home that acts as a TV screen with a digital display. Imagine putting on your AR headset and seeing a digital keyboard projected in front of you. You can type words, and they appear on the screen. You can click on a word and see a definition. You can select a word that sends you to a dictionary website.

AR is often discussed in terms of its application to smartphones, where it has the potential to enhance the “mapping” functions of these devices to enable them to act as a GPS navigator that you can see right in front of you. However, AR has far more significant implications when it comes to things like smart glasses, which have the potential to turn any surface into an interactive computer screen. This has the potential to make any physical object into something that can be programmed, downloaded with information, or even turned into a touchscreen interface. 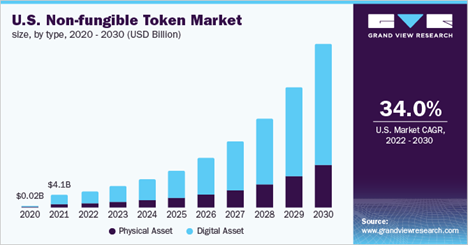 NFTs have been utilized in a variety of video gaming platforms as a way to trade virtual assets and characters. In some cases, NFTs can be used to represent in-game items that are traded between players. In other instances, NFTs can represent a particular game or character ownership. This type of ownership can be valuable in games requiring players to invest a lot of time and effort to progress. By using NFTs, players can trade their game or character ownership with other players to recoup some of their investment. Four examples of using NFTs:

NFTs can also represent a player’s status in a game. For example, a player might earn a “Legendary” status after completing a challenging quest or slaying a powerful boss. Other players may want to purchase this status to show it off to their friends or receive a special in-game boost.

Another example of a game that might benefit from NFTs is a massively multiplayer online role-playing game (MMORPG). In these games, there is a high degree of character customization, and many players put a lot of effort into making their characters unique. NFTs can represent the ownership of these unique characters, and other players can buy and sell them like traditional stocks.

Metaverse will allow for a more immersive experience like never before. The gaming community is a niche, but the passionate community and the components of the Metaverse is set to bring even more social elements to gaming, with the potential to bring it to the masses.