Did you know that Dr. Deming was a composer? In a recent podcast,  A New Approach to Lean – Robert Fritz, Robert told me:

By the way, I think Deming was probably the senior-most wonderful innovator in this area and I’d like to point out that he was a composer. Well, he was and Drucker was a musician. There is something about coming from music where you really understand in an extracurricular way how things are put together. So it does, and I’m not just sort of saying this because I’m a composer, but what one learns as a composer actually has an impact on how you look at organizations because in some ways they’re very similar in terms of elements in relation to each other and how they work together. It relates to the statistical approach that Deming has for manufacturing in terms of minimizing variances and building in quality. So, you don’t inspect it at the end.

I reconfirmed this in the upcoming Business901 podcast (scheduled for January 8th), while interviewing Dr. Joyce Orsini, a professor of Fordham University and president of the W. Edwards Deming Institute. Dr. Orsini recently authored the book, The Essential Deming: Leadership Principles from the Father of Quality. Dr. Orsini said:

I’ve been told that statisticians–or mathematicians, in general–are often quite good with music. I’ve heard that but I don’t know if it’s true or not. But he certainly was, he was a composer, he loved music, wrote music. He revised the Star Spangled Banner to make it singable without all the high extremes on it. He lowered it so that the average person could sing it. So he reduced the variation, if you will, in the music.

After these two comments, I went on a mission to find a composer to talk to. In fact, I found two through the Composers and Schools in Concert website. Both are board members.

The first podcast was with John Lawrence Woodall.  In 1989, John formed the company Powerof2Music and has since scored over 5 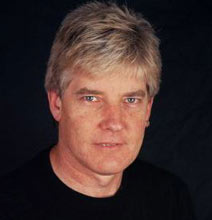 00 episodes of television such as “I Love the 80’s, I Love the 90’s, Abducted, True Crime, Manhunt, Ghosthunters (original), Command Decisions, iDetective and more. Today, John’s passion for music and film remains a strong and driving force in his continuing to push the envelope of scoring for picture.

This podcast is an interesting conversation about the relationship between math, architecture, music and continuous improvement. The podcast quality gets better a few minutes into the process.

or go to the Business901 iTunes Store.

About John: A native of Berkeley California, composer John Lawrence Woodall began playing piano at age 5 and started writing music by age ten, During High School in Australia John attended the Academy of Guitar and the N.S.W. Conservatory of Music. Although the focus of the time was rock and jazz, John’s deep love of Russian classical music introduced him to the possibilities of music and picture. Through High School in Boston John attended classes at Berkeley School of Music honing his skills as a string arranger and orchestrator. In 1983 he met legendary Producer/Engineer Jim Gaines and joined his production team at the Record Plant that created a dozen platinum albums and a handful of Grammys. In 1987, John received the Excellence in Composition and Songwriting award from Yamaha Music. John has scored two Emmy award winning shows, received the Ace and Gold awards for his work on children’s shows such as Baru Bay with Bob Weir.

About Composers and Schools in Concert: CSIC is a nonprofit organization who partners with professional composers and youth music programs (grades 9-12) to offer innovative music education through composer workshops and commissions.

4 thoughts on “Can Studying Music help your Lean Enterprise”