1,000 laptops are lost, stolen or misplaced every week at Los Angeles International Airport. Where’s the security there? There is none.

Thursday’s podcast this week is with Thomas Koulopoulos, author of Cloud Surfing: A New Way to Think About Risk, Innovation, Scale and Success (Social Century). Tom is an engaging speaker, (samples at http://tkspeaks.com), and you will find the podcast very entertaining. He left me thinking about the cloud and the possibilities in a totally different way. It’s not about technology. It’s about how we collaborate, work, influence and experience the world!

Joe: How does the cloud address security? Is it just as comfortable to have it out there somewhere as it is on your own server?

Tom: Well, the first thing that we should talk about, because it’s really important, is the perception around security. Let’s write that down. One of the concern’s people have is, when my information moves from my local hard disk, or from my local server that’s housed somewhere where I can lock it up, whether it be in my home or in my office or in some facility, there is this sense that only I control access to it. That’s just not true. 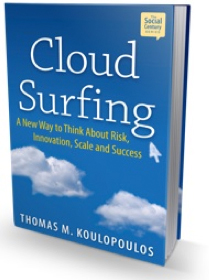 If you look at what’s happened recently with the alleged hacking of Iranian nuclear-power facilities that are generating potentially material for nuclear weapons, those were devices that were not hooked up to the Internet, by the way. Yet, supposedly, now we don’t know this for a fact. From what we’ve been told, the US government was able to hack into those machines and create some enormous damage to the centrifuges that actually create the nuclear material.

All this happened without anyone being aware until the centrifuges spun out of control. We have this sense that, because we have locked it up, it’s not on the Internet; it’s not attached to the cloud; it’s safe. That’s just not the case. Any system can be hacked. Security is a fundamental challenge in any computer?based system.

I’ll give you another example. At Los Angeles International Airport, which I often fly in and out of, in a single week, there are over 1,000 laptops that are lost, stolen or misplaced. That’s an astronomical number. I can’t get my mind around that, over 1000. It’s actually 1200 at last count. Where’s the security there? There is none.

As we move to the cloud, we actually create a high level of security and here’s why. This is the part that most folks don’t often understand. The reason the cloud has the potential to be more secure is because the cloud is constantly on the offensive, constantly looking for patterns and trends that indicate that someone is hacking it or attempting to hack it.

You’ve got a tremendous ability, because of the resources being applied to the cloud, to be more protective and more diligent around intruders and possible corruption of data than you ever would have on your personal computer or as a small business, what you would be able to bring to bear on that problem would be so small in comparison.

Half of all small businesses don’t even back up their local hard drives. Again, where’s the security? If the hard drive crashes or a server crashes, where’s that information? Half of all businesses don’t even back up what they have today. We’ve got to be very careful here because we can’t hold the cloud to some arbitrary 100 percent secure standard, because that standard does not exist.

What does exist in the cloud that is a much more sophisticated ability to constantly be on the watch for security threats. That to me is what we should be talking about. How do we invest in that security in such a way that all of us, small businesses, individuals, large businesses; nations have the ability to protect what needs to be protected? That only happens through a concerted, coordinated effort, which is what you have in the cloud.

Related Information:
Process Control Thoughts from the Poppendiecks
Uncommon Thoughts about Service
Time Based Thinking limits Lean Sales and Marketing
Why is ‘x’ the unknown?