Is there a way that I can get started and gear myself towards thinking that way and trying to simplify things? – jd

Don Sull: Absolutely, I mean my advice would be to try it. I’ll just give you a concrete example. I’ve used simple rules many times in my life but I’ll give you a concrete example. About a year and a half ago I ordered a bunch of shirts and they were the same size as the shirts I had always worn and I get them and I’m a cheapskate so I ordered a lot of them because they were cheaper if you ordered a lot. And, I get them and they’re all too tight. I’m like “Oh, this is terrible.” I tried to send it back, they wouldn’t accept them back. I had a very concrete problem which is I wanted to fit inside these shirts. To do so, I need to lose about 15 pounds. The first step is to have clarity on the objectives. On that case, it’s pretty straight forward. I wanted to lose about 15 pounds.

The second step is identify a bottleneck, a critical activity or decision that keeps you from hitting that objective. So, in this case, the way I did it was for about a week I got an app on my iPhone. I got an app and I tracked how much I exercised and how much I ate and when I ate it. You know, it’s trivial now. Ten years ago it might have been a pain in the neck to do that. Today it’s trivial. There’re probably a dozen apps to help you do that. What I found was interesting because what I wanted to find was, should I focus on exercise, should I focus on how often I walk, should I focus on eating, what should I do? 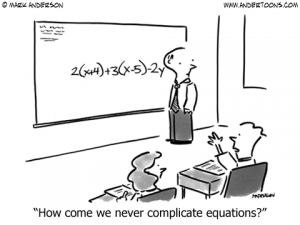 What I found was the following, exercise was okay. I was exercising, reasonably enough, probably didn’t have time to do much more. Eating during the day was okay. The real problem was after dinner, snacking after dinner and that’s when all hell broke loose. Basically discovered once I collected data for a week that I was eating the equivalent of a lunch or two every day after dinner in snacks. I said “Okay, great. My bottleneck wasn’t all these activities, it wasn’t exercise, it wasn’t even eating, it was after dinner snacking.” That’s a nice specific bottleneck and that allows you to develop concrete rules. Then, you go to the third step. You’ve clarified the objective, lose 15 pounds. You’ve identified the bottleneck, specific bottleneck, after dinner snacking. You develop the rules. And, here again, we come to this point, there’s not, you don’t take the rules off the shelf, you don’t read, you know, some book that says ‘this is the right diet’, instead you follow a process of, you know, talk to some people, look on the internet a little bit, play around with it and the rules are your rules. You develop them and they’re appropriate to your situation.

In my case, my rules were, well, initially I said, “I’m never going to eat dessert again.” Well, that’s not going to work. I came and said, “I’ll only eat desserts on the weekend.” Another one was I read some research done by a guy named Brian Wansink who has done a lot of work on portion control and what he finds is that if you eat snacks out of a bowl rather than out of a bag, you can cut your calorie consumption by half or more. So, I said, “Okay, I’ll eat snack, I’ll eat the chips out of a bag, sorry, out of a bowl rather than the bag.” Another rule is not to stockpile snacks. If you buy a case of Snicker bars, you’ll eat all the Snicker bars. If you buy one Snicker bar, you can only eat one unless you got out to the store again. Very simple rules from multiple sources but they were right for me and, you know, in that case it worked. I lost 15 pounds, so. It took me a couple of months but I did it.

Dr. Donald Sull  is a Senior Lecturer in the Technological Innovation, Entrepreneurship, and Strategic Management group at the MIT Sloan School of Management, where he teaches courses on Competitive Strategy and Strategy Execution in Volatile Markets. His recent book, Simple Rules: How to Thrive in a Complex World offers some great thoughts on reducing complexity.