Dare: What would Walt have Done?

“What would Walt have done?” became the most frequently heard question at company headquarters. Some employees said they felt that they were working for a dead man. Net income dropped 18 percent in 1982 and slid another 7 percent the following year.  The Walt Disney Company, an American Institution, was on a slippery slope, and with its low stock price reflecting the company5s disarray, it became ripe for takeover by corporate raiders who were circling like vultures.  – The Disney Way, 3E: Harnessing the Management Secrets of Disney in Your Company. 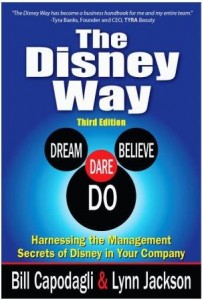 A company that is unwilling to push itself and step out of their box or as I like to put it towards the edges of their markets and products are next years giants. It is understanding and managing the risk that separates great leaders from poor ones. Few great leaders would bet the farm on an unknown unless they forced into it by the external environment. But we need to explore; we need to find edges in hope to reach our dream.

Most of us look for a prescribed roadmap that we can follow. I think a lot of that is because we are not risk takers. We are not willing to explore. In the Toyota Kata, we talk about first setting the Challenge (aka Dream). Next, we determine the current condition (aka Believe). We now look at what is our Target Condition (aka Dare). At the Dare step, we once again set what you might call an intermediate, obtainable target towards the Challenge. We create and group our stories and prioritize learning and determine risk. We look at the order of things, what can we do to take a step towards our dream.

I think this step is about how much risk is tolerable. However, too often we internalize this thought. When we were in the believe stage, we discussed partners and customers as part of the structure. I think it is equally important that a common understanding of risk exist between the participants, the characters. The old exercise of falling backward and having someone catching you is the most obvious metaphor I can use.

At this point if someone is not sharing the Dream, does not have the same Beliefs, the Dare stage brings this to the forefront. In fact, this character should stand out like a sore thumb, and you should start wondering how they fit into the story.

Don’t become confused that you need a total agreement. We welcome antagonists into the story. They are the ones that will drive us to the edges. However, they need to have similar Dreams and Belief. Where they differ is maybe in the approach we are taking or that our story structure is wrong. Which is OK as long as everyone is on the same page before we move to the last step of Do!

Walt Disney’s original success formula, “Dream, Believe, Dare, Do”, can transform both entrepreneurial and Fortune 500 companies alike. Bill Capodagli is the co-author of The Disney Way, 3E, along with several other books (I have them all), and can be found at Capodagli Jackson Consulting.

This is the third of a series of posts this week on the Four Stages of The Disney Way: Dream, Believe, Dare, Do.