ERIC SIEGEL, PhD, founder of Predictive Analytics World and Executive Editor of the Predictive Analytics Times. Eric makes the how and why of predictive analytics understandable and captivating. His new book, Predictive Analytics: The Power to Predict Who Will Click, Buy, Lie, or Die was called by Tom Peter’s, “the most readable big data book I’ve come across, By far, great vignettes and stories.“ This quote was pulled off Twitter and not from the book.

An excerpt from next weeks podcast:

Joe: When we look at this, data certainly plays a part but people would refute the fact that data can tell the future. I always use this Einstein quote “Logic will get you from A to B, but imagination will take you everywhere.” Can numbers be creative, can numbers be imaginative? 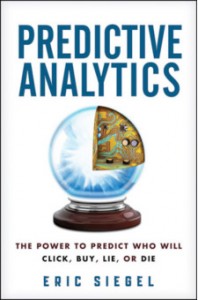 Eric: That’s a great question, I would say yes because as I’ve mentioned earlier – the core method here is predictive modeling, academically known as machine learning. It is literally looking at data, the history of many transactions of how things turn out in the past in order to learn how to predict under new circumstances for a consumer who has a new profile and new history of behavior that’s never been seen before and to robustly be able to apply what’s been learned. That is you’ve actually not just discovered a pattern that shows up in this particular data set but that actually holds in general. There is an art to that, it is amazing kinds of things that come out of it, it can’t be visualized ultimately by human thought process because computers can do things in a multidimensional way. It’s all about finding that model that looks at all the different factors about an individual, both demographic and behavioral, and consider them together in concert to come up with the best prediction for that individual. The means, the mechanism to do that is the model, is the thing that predicts is the thing that’s learned or output from the predictive modeling process.

I would say yes, there’s definitely creativity, I devoted a chapter to how amazing the results ended up being as far as the IBM Watson computer that learns from Jeopardy, the TV quiz show Jeopardy, questions and how to answer new ones – that’s an amazing story. However, unlike that story, usually it’s not about accuracy, so you premised your question just now by saying, “some people say you can’t really predict very well,” the fact is in general, especially with human behavior and the weather for that matter, there’s a real limit to how far ahead and in what way we can accurately predict. It turns out that the use of this technology on all of these different operations and getting value from it does not hinge on accuracy. Predicting better than guessing, often significantly better than guessing, is what makes the difference and what provides value in running mass operations more effective.

Joe: In the sales and marketing world, we’re always furnishing forecasting for operations, can predictive analytics improve our sales forecast?

Eric: Sales forecasts are a tough thing. It’s going to depend on factors that are way outside of your knowledge. It has to do with the overall world. What’s happening in the economic climate etcetera, sort of macro scale factors. What predictive analytics is good at is ranking all the consumers relative to one another. Who is relatively more or less likely to exhibit behavior. As far as how many are going to buy, that’s prone to go up and down in ways that we’re all susceptible – we’re all going for a ride in the rollercoaster that’s known as the economy, so there’s a difference between macro level forecasting. On the other hand, as far as the core technology, there are ways in which making millions of per person or per consumer or per enterprise client if it’s B-to-B rolling all of those millions of predictions up. In B-to-B maybe more like thousands, but rolling all of them up for macro level forecasts, there are technical ways to do that in which it can help, but in general there’s no sure fire solution to the difficulty of forecasting.